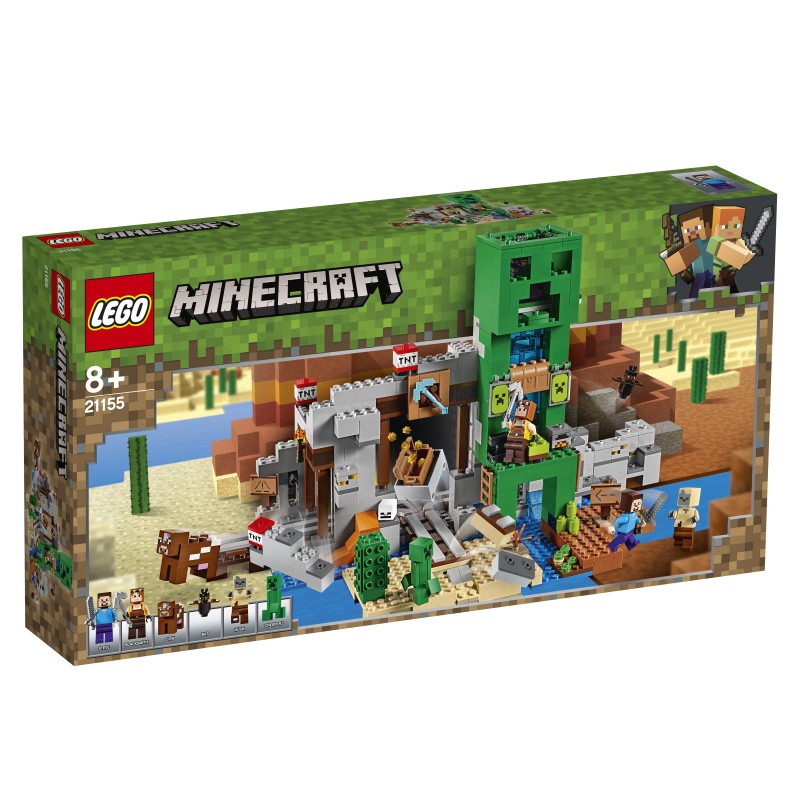 Jump aboard the minecart to enter The Creeper™ Mine!

You’ve joined up with a Minecraft™ blacksmith at a gold-rich mine deep in the mesa biome. The blacksmith’s shelter is marked by a huge Creeper™ statue and well equipped with an anvil, oven and secured treasure chest, but the bat-infested mine is fraught with danger! Grab your iron sword and diamond pickaxe and jump aboard the minecart to enter the torch-lit mine. Blast out the stone and clear the rail track with the Minecraft TNT, battle the Creeper and hide in the waterfall to launch a surprise attack on the roaming husk! Use the huge Creeper hopper to store your mined gold and when you’re done mining, pull the lever to send it direct to your chest! Get ready for some explosive LEGO® Minecraft action!

• Includes 3 minifigures: Steve, a new-for-August-2019 Minecraft™ blacksmith and a husk, plus Creeper™, cow and bat figures.
• Features a mine with rail track, minecart and 3 explosion functions; shelter with a large Creeper™ statue, 2 Creeper banners, ladders, bed, anvil and an oven; desert and mesa setting with 2 signs, cactus and irrigated vegetable patch.
• Use the Minecraft™ TNT to blast out the stone and clear the blocked rail track.
• Battle the husk with your iron sword.
• Hop aboard the minecart and head into the gold-rich Creeper™ Mine.
• Collect your treasure in the huge Creeper™ statue and then pull the lever to deliver it to the chest.
• Weapons include 2 pickaxes and a sword.
• Accessories include 3 TNT blocks, 2 chests and 4 golden ore elements.
• Set your imagination free—rebuild the set for more LEGO® Minecraft™ creations!
• This set includes over 830 pieces.
• Mine measures over 8” (22cm) high, 14” (38cm) wide and 8” (22cm) deep.

11 other products in the same category: